Having the day off work, I took both of my kids hiking last Monday.  My daughter has been obsessed with waterfalls lately, so we drove about 40 minutes out of the city to the Eardley escarpment of Gatineau Park, to do one of my favourite local hikes at Luskville Falls.  I love the scenery out there – for some reason it always reminds me of the mountains in South Korea and brings back a lot of good memories of hiking around the forests there.

The last time I had done the trail was in the Fall and I had been able to get away and do it alone, without the kids.  I had taken them before, but they had been young enough to ride in those backpack kid-carrier devices.  This was the first time that I figured they were both mobile enough to hike on their own.  There are some pretty steep sections and I had pretty low expectations about how far we would get.

Was I ever pleasantly surprised!  We managed to hike probably 2-3 kilometres up and back, with much of that steep enough that the kids had to scamper over rocks on all fours.  I don’t think I heard a complaint the entire time.  We usually go for hikes on trails that are much flatter and easier for little feet to navigate, but still I’m usually well prepared for a chorus of “My legs are tired”, etc.  It didn’t happen this time.  I don’t know exactly what it was but they really rose to the challenge.  No complaints at all.  My only guess is that beforehand I had talked it up to them as a bit of a challenge and that it was okay if we didn’t get very far because it was a pretty steep climb – I think that element of a challenge really made them want to do it even more.  Goal-setting starts by age 3 apparently! 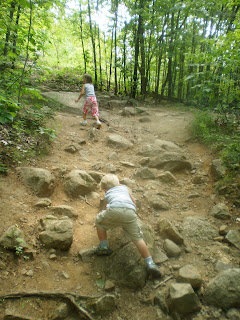 Of course, we kept a pretty slow pace, but it turned out to be a nice change.  Like I said, the last time I did the trail I had done so alone and I recall it was in the Fall and I had stopped in just before dusk on a road trip up to the Ottawa Valley.  I had set a pretty quick pace that time because I had wanted to get up and back before the mountain got really dark and I’d end up tripping and falling on the way down.  While that was great too, this time the slow pace set by the kids really forced me to relax and appreciate the beautiful day, the scenery, the smells and the small details.

Once the first acorn was found, the hike turned into a roving quest to find others.  We’d take 10 steps, scamper over a few rocks and then find another.  Each one had to be carefully examined for quality and either kept or discarded.  Despite my reassurances that only white oak acorns were usually palatable enough to eat, after boiling away the bitter tannins, we collected pocketfuls of the things, with my assurances that we’d try boiling these ones when we got home…just to see. 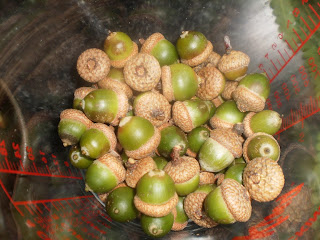 We took frequent breaks.  In addition to giving little legs a chance to rest, these opened my eyes to a few things I might have otherwise missed.  As the kids sipped their water bottles on one rocky outcropping, I caught the scent of sweetfern and noticed some clumps growing nearby.  I picked a bit, mentioning to my daughter that it made good tea.  To which she responded, “Is there anything on this mountain that we can just eat without cooking it first?”  I told her, a bit optimistically, that we might find some berries, but I’m not sure she was convinced. 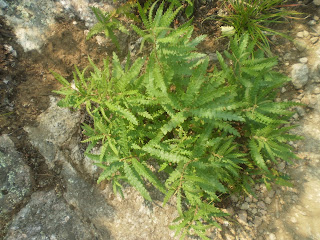 Lo and behold, another 10-15 minutes up the trail, there was a little narrow, overgrown side-trail that led down to the stream atop the waterfall.  In August, it wasn’t much more than a trickle but the kids wanted to go see it.  Initially I said no, as I was a little worried about them making it down the steep footing, but I reconsidered and, holding my youngest really closely, we made our way slowly down to the water.  There was a little pool of water where they could take off their shoes and cool their feet.  We saw a little frog perched on the moss and watched him for a while.  And then, as they were splashing around a bit, I spotted a few small blueberry bushes along the water’s edge.  There were only about 10 small berries on the bushes but it was enough to mean I hadn’t been a liar earlier on.  I divided them (equally of course or it would have been tragic!) between both kids.  I thought to myself that, had I pushed on as I initially wanted to (and most certainly would have if I had been solo), I would never have gone down this little trail and would have never found the blueberries.  It was the slow, meandering pace, set by my kids that had led us to them. 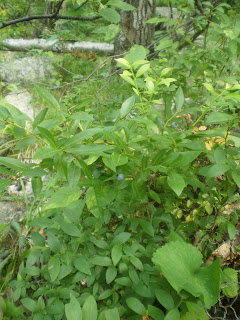 We went a little bit further and then I made an executive decision to start heading back.  Again, it was me, thinking about the steep descent, that spurred this, not any complaints from the kids. They wanted to keep going.  We had a few minor slips on the way down, but overall they were very sturdy and cautious and we got back down with minimal scrapes and injury.  I couldn’t think of a better way to spend the day if I tried.  And a big part of that was because I had to slow down and adapt to a child’s pace.  There’s a broader lesson in there somewhere…assuming I can remember to apply it.
Posted by Unknown at 20:53 No comments: