Resistance? - Training with your kids

You hear, a lot of the time, people using the fact that they have kids as an excuse for not working out.  I'll admit that there are some times when little kids can be a barrier to getting a solid, uninterrupted training session in - however, if you can find ways to involve them and make it fun for them, your kids can actually improve your training rather than detract from it.

Here's an example of what I mean.  This is a video of my two kids, ages 4 and 2, helping me with some chin-ups in our backyard this morning: 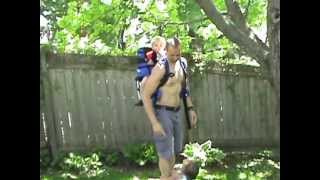 The best part is, I never have to do any persuading to get them to help me out. They love it - I think because they feel they've got an important job to do, and it's fun for them.  And in addition to helping me out (in the form of added resistance to make me stronger), it seems to foster their own interest in exercise.  My daughter now, when she sees a low tree branch or monkey bars, wants to try to do chin-ups herself.  At 4, she's not quite strong enough yet, but she tries damn hard and she'll get there sooner than later, I know it.  She also stoked that this year she'll be old enough to run in a mini-Spartan Race in June.  Those interests aren't from any direct influencing that I've done, but rather from the fact that she sees exercise like this as just a regular, fun part of daily life and not as a chore.  What you don't see in the video is that immediately afterwards, she wanted me to sit on her back while she did pushups!

Back to the video.  You can easily imagine how this type of thing could be adapted for almost any type of bodyweight exercise.  Thanks largely to writings from Martin Berkhan on the subject, I've been using a reverse pyramid approach to most of my lifts, from squats to deadlifts to weighted chins.  I spent a lot of my life doing the more traditional type of pyramid where you start off with higher rep lower weight sets, gradually increasing the weight up until a max weight low rep set and then (perhaps) pyramiding back down.  However, that entails expending a lot of energy on your lower weight sets - possibly negatively impacting the max set (i.e. the one that really counts).  After reading Berkhan and others, and experimenting on my own, it seems to me to make more sense to, after a few brief warm-up sets of low reps to get used to the movement, go directly into your heaviest set for the day (i.e. the one that you most hope to increase from your previous workout).  Following that (whether it be a single or in the 3-6 rep range), I drop the weight about 10% and then try for higher reps (maybe 6-8).  This can be done several times, dropping an additional 10% (of the new weight) each set and (hopefully) increasing rep ranges until you might be doing 15-25 on a final burn-out set.  I can only speak for myself, but this type of training set-up has led to quicker gains than most other methodologies I tried over the past 15 years or so.

When training with kids in tow, it's obviously not an exact science, and it's more important that they're engaged and having fun.  For instance, today I was doing my max set (with both kids as added weight) at almost exactly 300lbs (230[me] + 38[Violet] +32[Eli]).  For my first reverse pyramid set, her stepping off actually resulted in about a 13% total weight drop for the second set, and taking Eli off for the last set was actually another 12% drop, but it doesn't matter all that much.  Save the precision for your next uninterruped session with a barbell.  First and foremost, training with your kids should be about having fun and making sure they're having a good time too.

I would encourage anyone to give your kids the benefit of the doubt and try to engage them in your training.  I'm sure people can come up with all sorts of ideas that I've never even though of.  Whether it be sprints in a wheelbarrow, having a contest to toss them up as high as possible into the air (make sure to catch them at the bottom), or whatever else that they see as fun (usually they're the ones with the best ideas!) - go for it.  Where else can you find a set of weights that keeps getting heavier as you get stronger, while at the same time shouting encouragement at you and telling you hilarious knock knock jokes that make no sense?